If you want to get away from big cities and take in some of the best views in the Mediterranean, your choice must be the historical city of Valletta in Malta. First of all, the population here is less than seven thousand making the city just a big town in disguise. Secondly, while all views of the startling blue waters of the Mediterranean are heavenly, Valletta has views on two fronts: being built on a peninsula it is sandwiched between the busy ports of Grand Harbour and Marsamxett Harbour. 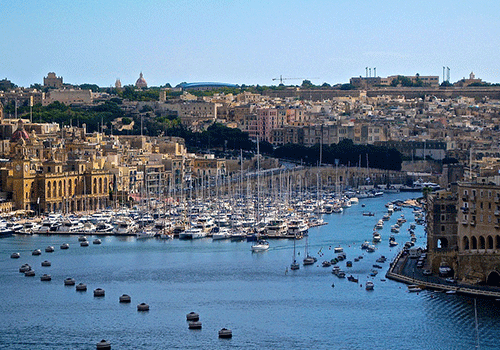 One of the most beautiful harbours in the Med ( Image:Pixabay)

Whether visiting this island capital on your own, or stopping by on a cruise ship, it is good to know a bit of the history of this place so you can get the maximum pleasure from your visit. And stepping into Valletta is very much like stepping into history. Because the city has over three hundred “monuments” to its past all concentrated within such a small area, it was designated a UNESCO World heritage Site in 1980. Except for the destructive effects of World War II ( Valletta was the most heavily bombed city in Europe believe it or not), the city has not changed essentially since the days its founders, the Order of St.John, deserted it in 1798 over two hundred years ago.

Valletta was built by the Knights of St. John over a relatively short period of time on the Sciberras Peninsula beginning about 1530, both as a fortification and a statement of claim of the Order over the island and the city. It was named after the Grand Master at the time of the island’s victory over Turkish invaders, Jean de Valette, and became capital in 1571, with most of the major construction finished that decade. It is a dedication to the Baroque period in the style of its churches, palaces, squares and gardens. 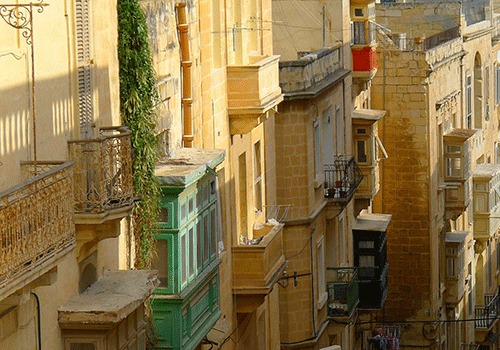 Despite its size, Valletta is quite a lively spot with quaint shops, bars and little cafes lining its old streets. Nightlife abounds with jazz a predominant sound. The historic Saint James Cavalier (a former gun platform) is the new center of cultural activities, called the Centre of Creativity, encompassing art galleries, music halls, a cinema, and a theatre. One of the oldest still working theatres in Europe is to be found at the Manoel Theatre in the city, built in 1731. Looking for museum quality paintings? No visit to Malta or Valletta would be complete without seeing St. John’s Co Cathedral and Museum with its Beheading of St John the Baptist by Caravaggio. The wondrous painted ceiling and carved stone walls of the church are impressive. Valletta has been selected to be Europe’s Capital of Culture for 2018.

Other places of interest for the visitor are The Palace of Grand Masters for its collection of the Knight’s armoury, the National Museum of Archaeology for Valletta’s history pre-Knights, the Upper Barrakka Gardens and the nearby Lascaris War Rooms, and the Casa Rocca Piccola. At this last place, a largely private redience, you can also glimpse a taste of the underground world of Valletta that grew out of the need to escape the war’s bombing by visiting the Casa’s private bomb shelter.
But when you wish to escape the dark underground world of Valletta for the Mediterannean sun and to view the magnificent vistas, you can take a walk along the shores outside the city walls. There, perhaps  enchanted by a nearly deserted hidden beach ,you may be tempted to swim in the crystal blue waters of the sea or just to relax in the serenity of this place where the blue of the water rivals that of the skies.  Valletta is the perfect blend of history and of grand vistas that make this port of call a superb and memorable vacation spot.

Boats in the Harbour at Valletta (Image:Pixabay)

Your cruise professional can set you out on a voyage to discover Malta and its capital, Valletta. This port city is a stop on the itinerary of a number of the major cruise lines that visit the Mediterranean.