Did you know that to see the largest collection of Roman ruins in the eastern Mediterranean you need to visit what was at one time referred to as Asia Minor? This would be the ruins of the once mighty city and seaport, of Ephesus in Turkey.

Ephesus was founded in the 10 century BC but hundreds of years later flourished under the control of Rome until it became the third largest Roman settlement in Asia Minor. Over the succeeding centuries it was destroyed many times, sometimes by invaders (the Goths), and sometimes by natural causes ( earthquakes, such as in 614 AD). It was rebuilt again and again until the time came when its harbor was no longer usable, having filled with silt from the river Cayster. Ephesus fell into decline. Today it is one of the most popular tourist spots in Turkey, and on the itineraries of many tour companies and cruise lines.

History buffs and Christians are high on the list of tourists to visit Ephesus. Why?

~ Here was built the Temple of Artemis in the 6th century BC . It was one of the Seven Wonders of the World and erected in honour of the Greek goddess of fertility and midwives. It was rebuilt many times on a grand scale, but destroyed as the city was by fire, earthquakes and conquerors;  today, little visible remains except remnants of its foundations and a single column, sadly no longer the height of the originals (over 90 feet tall). Some artifacts from archaeological digs have been removed from the site and are now in museums in Turkey and England. The Ephesus museum in nearby Selkuk houses many of these and videos in English.

~ The Basilica of St. John was built over the apostle’s tomb in the 6th century. Prior to that there had been a small chapel. It was a magnificent structure in the shape of a cross with six domes. The church was converted to a mosque in the 14th century and destabilized by earthquakes shortly thereafter. St. John wrote Revelations, and the church at Ephesus is one of the seven mentioned in this book of the Bible.

~ Legend has it that the Mother Mary accompanied John to live in Ephesus, and her supposed house, the House of the Virgin Mary, is located a short distance from the city. Again the house is no longer recognizable as such having been converted to a church in the 4th century. It has been visited by three popes since 1960, and is partially open to the public.

~ St Paul the Apostle, having been born in what is now Turkey, also visited and spoke in Ephesus. 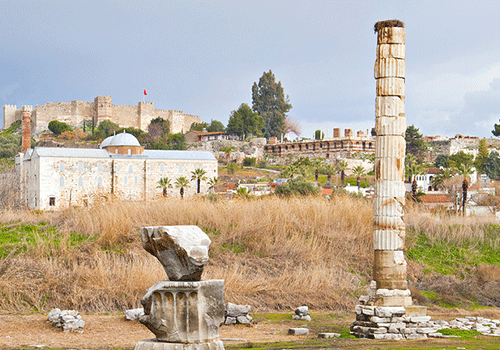 Remains of the Temple of Artemis (Image: Bigstock). 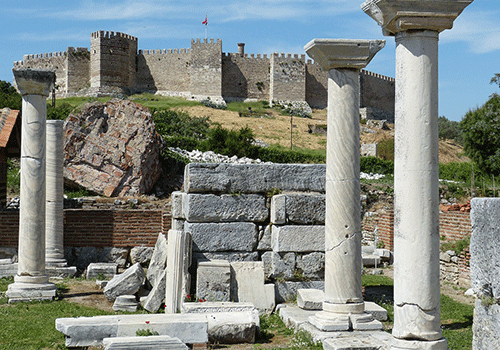 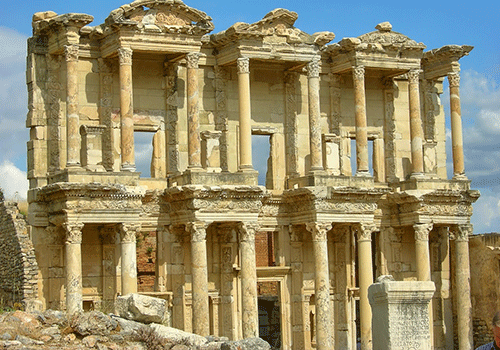 ~ The Library of Celsus was an important and massive library of twelve thousand scrolls – impressive for that time having specially built niches to preserve the scrolls from damage. It was built in the 2nd century AD by Gaius Julius Aquila in memory of his father who is entombed beneath the structure. The facade of the library has been reconstructed from the original; it is the most impressive building at the site, and is truly magnificent to see. Originally, there was a statue of Athena the goddess of wisdom predominant at the entrance, and statues of various gods and goddesses in the column niches. The originals are now gone but replicas of the smaller statues are in place.

~ The Grand Theatre is dominating. Believed to be the largest outdoor theater in the world for its time, it would seat over twenty-four thousand people. It was three stories high with the lower section reserved for the important people of the day. The theater was used for all types of events: plays, concerts, politics, lectures and gladiator fights.

The site at Ephesus is massive, an entire city in ruins containing many temples, squares, bathes and other structures prevalent in its day – all of which are there for you to visit. Only a very small portion (less than 20%) of Ephesus has been the subject of archaeological digs so much more is to be discovered. As an outdoor museum, it is an experience of a lifetime to walk in the footsteps of the ancient Greeks, Romans, Christians and others who have lived and worked here.